Day one of D23 kicked off with the Disney Legends Awards Ceremony! All Ages of Geek got to watch the fantastic spectacle at the Ultimate Disney Fan Event as fans got to not only experience the ceremony live, but celebrate 100 years of Disney! Disney CEO Bob Chapek presented the panel and gave fans an early look at Disney 100 Years of Wonder—an extraordinary celebration 100 years in the making. The magical opening event featured musical performances, awards, special guests and surprises including special performances by Disney on Broadway, and surprising us with a performance from the cast of Encanto!

Since its beginning in 1923 the Walt Disney Company has had an everlasting impact on the entertainment industry and is now one of the largest media companies in the world. The historical milestone – 100 Years of Disney celebrates all the magical Disney moments throughout history, its’ innovative storytelling, and how it revolutionized entertainment. The ceremony started with a momentous performance by the cast members from Disney On Broadway’s productions of Aladdin and The Lion King, and the North American Tour of Frozen. After the special performance there was an introduction of the international Disney ambassadors, and their contributions to their respective theme parks and attractions around the globe! There was also an announcement for the expansion of Avengers Campus to include more of the Multiverse!

Honoree winner Tracee Ellis Ross, talked about her role on “Blackish” and being able to play a joyful black woman, and breaking Hollywood stereotypes.  She talked about opportunities where spaces can be created, and her 8 years on Blackish opening up the chances for more black women centered stories.

Chris Montan received the honorary award for music and songwriting. He discussed how for Walt music was always a very integral part of storytelling, and how universal melodies are for different generations.

The late Chadwick Boseman was inducted as a Disney Legend. His brother Derrick Boseman accepted the honor on his behalf, and gave a beautiful and emotional speech to honor his brother. “When I heard that Disney wanted to honor Chad, the first word that came to mind for me was “honor,” Boseman said. “As I think about my brother and this honor that is being bestowed upon him, I wish that he was here to receive it. Him not being here has been a point of immense pain for my whole family. But I think about he honored our parents. How he honored his family. How he honored even his friends, and he made sure that his friends had good careers. How he honored them with his blood, his sweat, his tears, as he played these roles he was taking chemo at the same time.” Thanks to Chadwicks renowned performance as King T’Challa in Black Panther the film was widely acclaimed, earning a best picture nomination and ranking over a billion worldwide.

Some of the Encanto Cast surprised us with an epic performance of “We don’t talk about Bruno.” 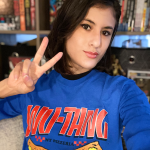 Nadya Martinez AKA GothamGeekGirl is a freelance journalist/ reporter, content creator and creative writer with a focus on All Things Geek. Nadya is always looking for what’s new in comics, gaming, and entertainment, helping to promote brands, events and creators across the Geek community and beyond.