This article discusses the episode “Mindful Education” from Steven Universe Season 4. If you haven’t watched it, you might wanna click that back arrow.

Remembering back to August of 2016 is extremely difficult for me, but perhaps the one thing I do remember from it is the episode of Steven Universe “Mindful Education.” Even as someone on the extreme periphery of the fandom back then, I remember this episode being applauded. Its topics, themes, and handling of them were top tier.

Even now, over three and a half years later, the episode and its subject matter stick in my mind, cropping up like ephemeral wisps in my mind.

The basic idea of the episode is that Connie’s training overrides her thoughts and she ends up breaking another boy’s arm. It then goes onto address her anxiety about the entire situation. The highlight of the episode is the iconic song “Here Comes A Thought.”

On a personal level, this song is perhaps one of the best I’ve ever heard/seen in any animated series. While the lyrics are simple and repetitive with just a handful of lines repeated, they’re extremely powerful and multilayered. The accompanying visuals are also fantastic and symbolic (if a little obvious).

The song truly does perfectly encapsulate the themes and ideas of anxiety as well as how to combat it. On a simple, conceptual level, anxiety is little more than the mind attempting to protect one from harm based on past negative experiences by projecting that into the future. In reality, it is often crippling to simple functions and can significantly hold one back. However, let’s just stick with that simpler idea for the fact that the song is only about three and a half minutes long and works well for this particular context.

It is a beautiful representation within this particular context. Butterflies begin as caterpillars that start small and grow larger by slowly eating away at plants. As time goes on on, they eventually become large enough to go into a period of dormancy before turning into a butterfly. As the song reminds us, “Things that you said are suddenly swarming.”

—while others let it accumulate over time and things constantly built as they refuse to deal with those emotions.

Regardless of how people deal with it, it almost always feels overwhelming and like it’s the end of the world. It can be crippling and prevent you from wanting to do something you love due to past negative experiences. 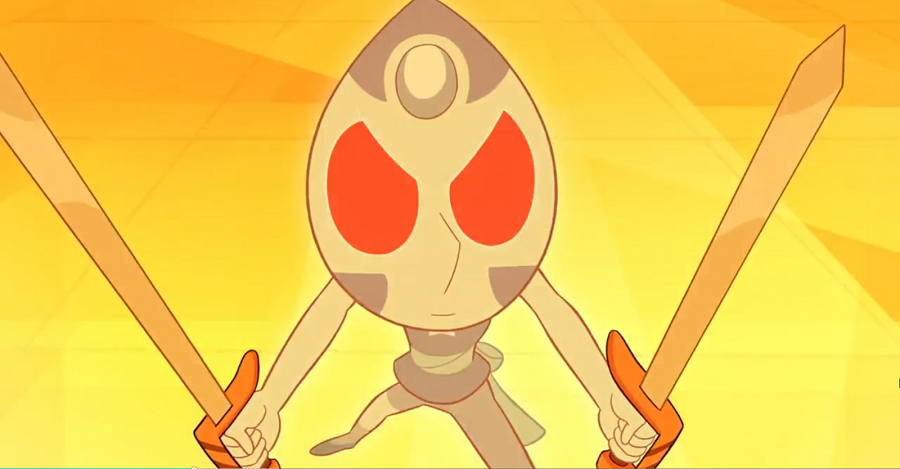 One of the scenes that precedes the song and acts as a trigger for it. Connie’s thoughts turn Holo Pearl into the boy she accidentally hurt. It stops Stevonnie from attacking.

The earliest parts of the song focus on how overwhelming anxiety can be, but the later parts offer hope and help on how to combat it. The advice is simple, straightforward, and clear, but it’s not always the easiest thing to follow especially if you’ve worked yourself into a panic.

Of course, these tools may not always work or be feasible. Mindfulness is something that takes a lot of practice to become a tool in one’s toolbox that they think to reach for. I know that, personally, it’s something I’m trying to work on. It is something that’s possible to do, though.

One place it should be taught is when teaching somebody how to fight. It should be taught to be used as a last resort, not something that can easily be activated on instinct like what happened with Connie. This is something that, characteristically, would not fit with Pearl and likely how this entire situation happened with Connie. The song “Do It For Her” from “Sworn to the Sword.”

“You weren’t built for fighting,

But that doesn’t mean

You’re not prepared to try.

What they don’t know

Is your real advantage,

When you live for someone

Philosophy and fighting have gone hand in hand for centuries and many people and places have forgotten that as far as the US goes. Many dojos nowadays teach simply the physical art, not the full philosophy behind it. I’ve been studying and practicing martial arts for over three years, so this is something I understand very well. Mindfulness in all we do is a big part of the dojo I study at.

This is something Connie should have likely been taught, but, again, it is not something that is part of Pearl’s character. Gem society simply fights for the sake of conquering, not as a way to help center one’s self in the world and exist as the best version of themselves.

Plus, if Connie had been taught that, we wouldn’t have gotten this fantastic episode and song.

Bringing this back around, “Mindful Education” is perhaps one of the best episodes in an animated series. Its portrayal of anxiety and the advice to help learn to deal with it is one of the most on-point discussions of it I’ve ever seen. There’s a reason many people count it among the greatest in the series.