Have you ever had that moment where you look up and you almost can’t believe you’re actually doing something you’ve been dreaming of? It’s one of the best feelings, but then I look down and see it’s 3 am, and I can’t remember when I ate last and I’m pretty sure my computer just crashed.

For years I’ve come to realize that I want to make youtube videos, I want to express myself and show the world my world. I use to be very artistic, but the pressures of early childhood authority convinced me it wasn’t for the best. Over the years I began to lose that artist and creative side, something that I happily spent many hours on. I use to draw every day, and I was proud of my work. However, over the years, life and expectations separated me from something that actually nurtured a part of myself that made me feel at ease and happy. As I got older I began to realize that not only do I have every right to enjoy what I want, regardless of anyone’s approval, but I really began to miss it. In those passing years, bullying, mistreatment, and toxic environments turned me into a very angry and aggressive person who struggled to keep his emotions in check. One thing I’ve forgotten is that it was my love for art that kept me relaxed, it made me happy.

I’ve proudly been a part of AAOG and I’m currently working on other projects as well, but when I heard that the team is looking for more potential hosts and shows, something clicked in my head, despite not at all being where I wanted to be as far as resources and knowledge, I knew I still had to answer the call. So I began to test the waters with my phone’s capabilities. Obviously, it didn’t meet the expectations I would want for a youtube video, but it was more than enough. So I began to run a few tests, and after I finished, I checked to see if my laptop was capable to run editing software. It had just been enough, and after that, I realized what I had to do.

I had absolutely no idea how to even begin, So I began with what I needed, lights! I went to Best buy to find a holder for my phone, and I found one that came with a small backlight that cost only $35 dollars. After I made that investment it was time to write a simple script, just bullet points of subjects I’m going to talk about, this was so I can talk freely and naturally. So I set the camera and lights and began to film, however, I began to realize that there was a problem. I’m a person who has difficulty orally expressing myself, so speaking smooth unbroken sentences without drawing a blank became difficult. As I tried to film I time and again drew blanks, and it was not coming out smoothly, after talking with a personal friend who has dreams of making his own youtube channel and being a voice actor, he told me I should write a script. I was hesitant because I figured a script would make me not seem natural, almost as if I was being fake. As we began to talk further on it, I began to realize that adding a full script was ok and that it was nothing more than a guide to keeping me from drawing more blanks. I wrote down everything I wanted to say and said it how I wanted to say it, nothing I do or say was done for the sake of appeasing an audience, but because I myself found it enjoyable and entertaining.

When I finished, it was time to paint the minis, again I ran into a problem. I couldn’t find the right angle to capture my painting. I attempted a top-down version but I couldn’t get it to sit in the position I want, and the light attached would be too far off the model. So I decided to be behind the camera and paint with my hands in front, unfortunately, it wasn’t the perfect system but it was enough for now. When I started painting, I almost forgot I was working on a project, I began to fall into something I haven’t felt in years. I put my paints on my painting sheet, and as soon as my first brush stroke went across my first figure, that’s when I knew that for the first time in years, I was an artist again.

No amount of time doing something that relaxes you is wasted time, especially in a world that tries to break you through stress and anxiety. after I finished my last moments of painting, I filmed my last dialogue seen then finally jumped in to see what editing software I could use and If id even is able to use any. (This should have come first, honestly) Eventually, I decided on davichi resolve, arguably one of the best free editing software out there. So with my fingers crossed I began the download and started the longest, hardest march on this project.

My computer is simply a school laptop, nothing fancy, nothing advanced, so when running davinchi it would run slowly, sometimes so slowly it would crash, and anything I didn’t save would get deleted. This, unfortunately, happened several times until I decided to save the project every 10 minutes or after I complete several shot edits, I also saved if I had to leave for any reason. This became an increasingly challenging undertaking because time was less on my side every day. I was 3 days away from the 31st (Warhammer day) and I had to have this whole video edited with a slow computer, a slow running editing software (due to my laptop), and had to do it all while taking a crash course in video editing. All of this was happening for the first time with me, and eventually, all of those issues would begin to stack itself against me.

Unfortunately, due to this, in order to compensate for time lost, I began to neglect other things, two big ones being eating and sleeping. At the finishing of the video, I had gone 3 full days without sleep or food. Only drinking water and green juice, and taking 10minutes to one-hour power naps when I began to feel tired. On the final day of Halloween, I finally finished the project at 4 pm, but what sealed the tardiness of the video was a crash on my computer when I attempted to format it. What made it even worse was when I finally did, I was informed that it was formatted incorrectly, causing the wait time to extend over 3 hours. After correcting my mistake, I finally had successfully turned it in, late or not, I was proud of what I had achieved, worth all the time and struggle. However, I think this is the last time Ill ever sacrifice sleep or food again.

During this time, I began to notice a shift in myself, the timing was serendipitous because I had already dedicated to detoxing and taking cold showers, along with listing to Jocko Willink and other forms of personal development. With that plus the amount of effort and sacrifice I put into this, I noticed a change. For years I struggled with ADHD and staying focused, I would always procrastinate, and therefore I would often fall behind on everything in my life. It caused me to struggle and made it hard to learn anything or stay on target. However, with everything that happened, plus the fire under me that was kept lit with the desire to not only live one of my dreams but also to create amazing work for people I’ve come to really admire and respect. Unlike ever before I found myself almost never on my phone browsing, always focused on the next task, and always ready to push forward, any loss of focus would quickly be recalibrated and my drive and focus in this project began to flow into other parts of my life. I was scheduling everything, I was ready to really jump back into school, I kept my apartment clean. I began to change, and change for the better, this project has awoken something in me that I’ve been trying to unlock for years without success. Yet here and now as I write this I can confidently say in those last 3 days when the world stopped, and I have left no food, or rest, nothing but my burning desire to get this done before the  31st,  that I began a metamorphosis as if the last 3 days have been a self impost chrysalis.

When it was over, I became transformed new, I felt as if I’m beginning to blossom into the person I’ve always wanted to be. I realized that this, was the moment I’ve been trying to find so hard, failing time and time again, I realized that at long last, I had achieved my breakthrough moment.

My growth is far from over, and I 100% plan to continue this growth amongst the company of friends and the people I love. This journey is not over, and I have answered the call to action, and I hope someday when the time comes, you’ll answer the call as well.  Please enjoy the video, Thank you. 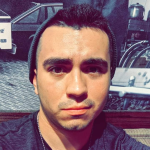