First time developer Mighty Yell is getting ready to showcase their title The Big Con with help from Skybound Games. At the Tribeca Film Festival, several games are getting the spotlight for players to try out these upcoming indie titles. In The Big Con, players control a runaway teen con artist taking place in 90s America. Filled with 90s references, there’s ton of nostalgia for those who grew up in that era as you try to pull off some heights with disguises, schemes, and maneuvers.

Both director Dave Proctor and art director Saffron Aurora shared their journey creating The Big Con and the inspirations behind this unique concept that has people talking. Since this game involves elaborate schemes with a con artist, its worth noting that these guys were into that whole lifestyle and 90s culture. “I love con artist movies and I grew up playing a lot of adventure games. We wanted to do something in the 90s. When Saffron joined the team, she started putting together a whole visual look based on her research and experience of 90s media. Its the merging of a lot of really talented people having good ideas,” Proctor said. With the art style, the game does lean into popular animated shows from that era. Saffron shared how the visual style reflected on the type of game they were creating. “Initially, the game was much grungier so when I came on, we went with more inspired by the 90s cartoons. A lot of people bring up Doug, which is very fair because we did look at Doug, Hey Arnold!, Rugrats, etc. Any cartoon that had a non-regular headshaped head. That was a big inspiration.” 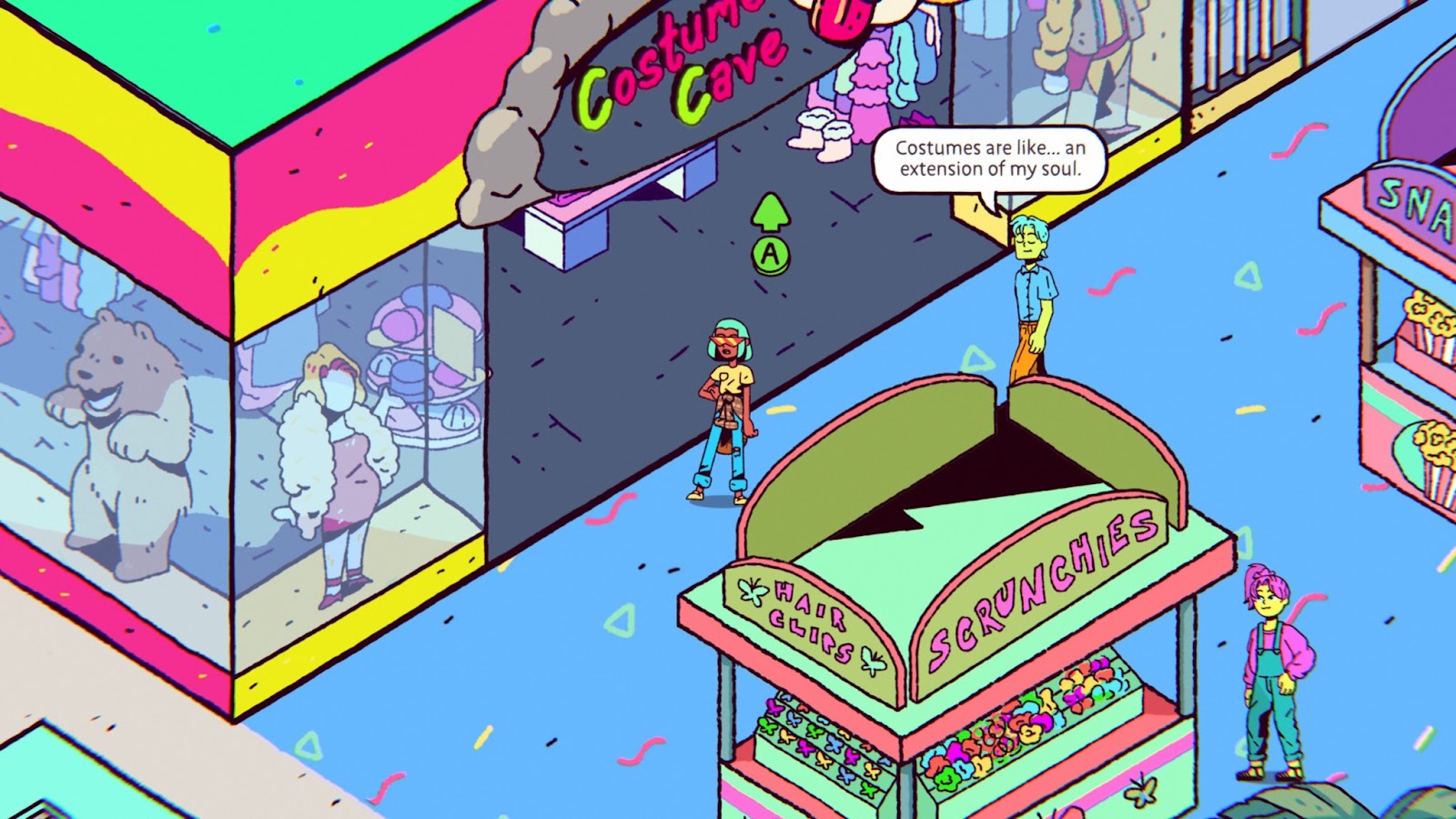 According to Proctor, it took about three and a half years to create the concept for the game. “The prototype for this was built back in early 2018 so we are coming up on about three and a half years. It’s longer than maybe some projects would’ve liked it to be done by now. It took the amount of time that it needed to.” After a long journey, it all paid off once Skybound Games came in the picture to help develop the game even further. “Making The Big Con had its own set of challenges. We’ve been pitching this game to different people over the years and we never really found someone that believed in it the way we believed in it and saw what we were trying to do the same way Skybound did.”

With COVID-19 delaying production for games, the development team at Mighty Yell had some challenges ahead of them, but managed to make it work. “I do wonder what its going to be like when things get back to normal again. I think there will be a period where I will have to adjust, but it is much easier having that schedule of seeing people and being in the same space,” Saffron said. Proctor added, “We did a lot of work from home, we just had those one meetings that we would show up for. We also have to accept that some days are difficult right now and I’m sure that will go away ever so slightly.”

Perhaps one of the biggest things to come out of creating the game was teaming up with American a cappella group Rockapella. Known for their work on Where In The World Is Carmen Sandiego?, the developers got to work with the musical artists on the game’s music video. “Like what from the 90s kind of resonate with our game and the greatest thief in 90s media history meets the greatest thief in our game. It was a perfect fit. We reached out to them and they were really lovely. They were excited about the game, easy to work with, and we have kind of hit it off in a lot of ways,” Proctor said.

When it came to inspiration from games, the major ones like Pokemon and Paper Mario came up since The Big Con relied on exploration. Saffron mentioned how much of these games meant to her and how big an influence they became when working on the project. “The two games that came to mind are some of the earlier Pokemon games that I would play on my GameBoy. Paper Mario was the other big one for me. The humor in that game is fantastic and its so fun. You were able to engage with the environment and explore…That was the feeling I think that we wanted to capture and those were the big ones to me.” Even puzzle games were a big part of the origins of The Big Con. Proctor also shared some of his inspirations and what he hoped players would take out of the experience. “I always wanted to know if it was possible to make an adventure game where you can do more than just the traditional key and lock puzzle. I love games like Monkey Island, that was what I grew up playing a lot of. I wanted to know if it was possible to do this multi-path quest design where its just little quests that add up to one big goal. You can play as much as you want, but its not completely open-ended and systemic so we’ve given you a lot to do.”

You can check out the rest of the conversation in the video below. You can find out more information about The Big Con and updates on when it releases by checking out Mighty Yell on their website.