Superhero origin stories can sometimes be a coming-of-age tale if you think about it. Spider-Man is a perfect example of a Marvel hero who started out in high school and evolved not just as a superhero, but also as a person dealing with normal teen problems and growing up. That is what we get here in the MCU’s latest series Ms. Marvel as viewers are introduced to Kamala Khan, a Pakistani teenager who’s a huge Captain Marvel fangirl who develops powers of her own. This is also the debut of the young starlet Iman Vellani, who plays the title character on screen. The show carries a different tone from the other Marvel-related content on Disney+ as it is much a comic book story that also is about a teenager discovering herself in a world full of superheroes.

Within the first two installments of Ms. Marvel, we get acquainted with Kamala in both her school and family life living in New Jersey. She goes deep into her thoughts as she fantasizes about being a superhero and meeting her idol Captain Marvel. She tries to please her folks while also living her life as a teen who loves going to AvengerCon and playing dress-up as a superhero. Much of the show embraces the best parts of the comic books that Kamala is based on. Of course, there are changes with how she obtained her powers, but it fits in within the larger MCU world that’s been set up in the films. Ms. Marvel clearly isn’t just any normal superhero origin story, it’s a show that tends to go into the heart of this beloved character while breaking barriers to showcase the Pakistani culture that converses into something that is completely related to the viewers. 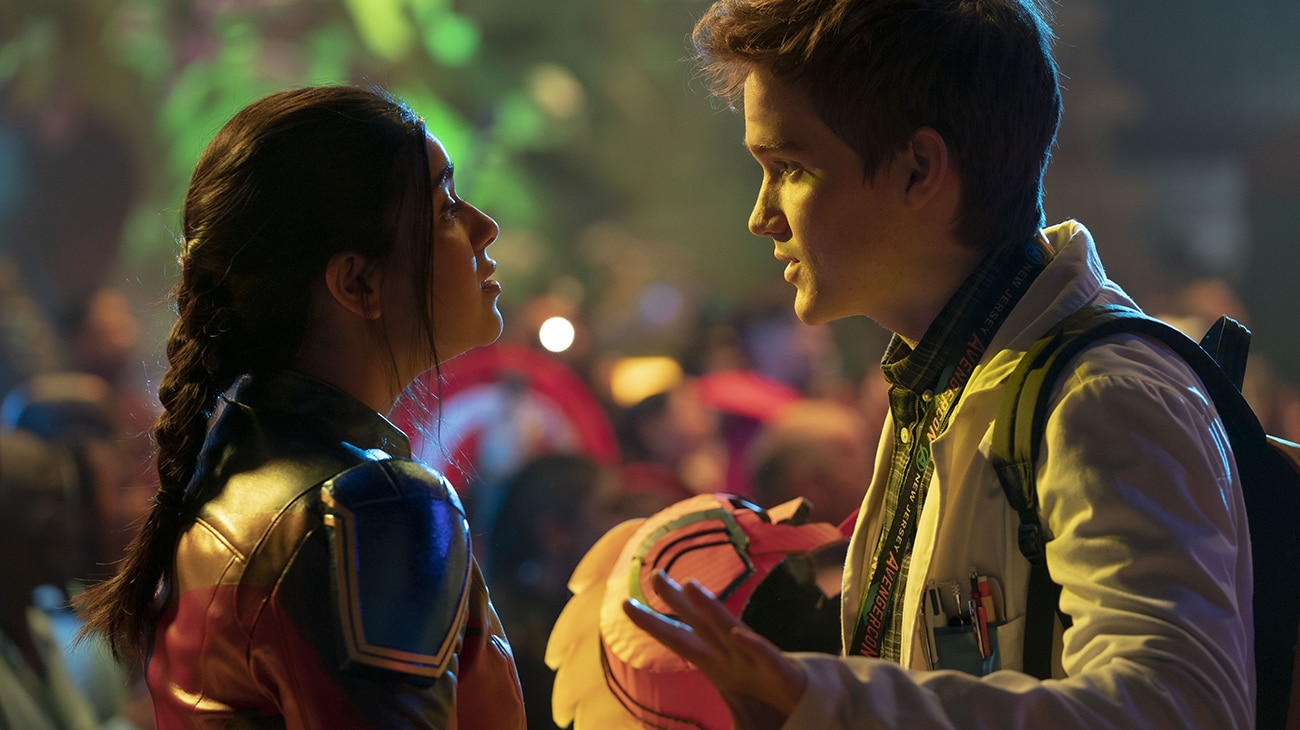 What Ms. Marvel excels in is showing us a character that is living the ultimate high school experience filled with friends, high school crushes, and surviving school. She is surrounded by friends like her BFF and family friend Bruno (Matt Lintz) as well as Nakia (Yasmeen Fletcher). We do see that chemistry between Kamala and Bruno that becomes very focal to the story once she gets her powers. We also see some of that same friendship with Nakia during the second episode when both of them get involved with the local elections at their mosque. We also get see Kamala get into the crosshairs of popular student Zoe Zimmer (Laurel Marsden), but it doesn’t play out like the local school bully or the mean girl at all. It’ll be interesting to see how well these relationships develop throughout the series, especially once Kamala takes on more responsibilities as a superhero.

16-year-old Kamala is also stuck trying to figure out her future after high school as she continues to fantasize about superheroes like any other teen. It seems her peers aren’t too keen on Kamala living through her imaginations without considering her dreams for college, especially her parents. It is common to see superheroes struggling between having powers and responsibilities, which we get with Kamala straight from the get-go after we see her with her family. We do get that experience of living as an immigrant from this family as we get well-versed in the culture through scenes between Kamala and her mother Muneeba (Zenobia Shroff). Whether it’s shopping in Jersey or celebrating the holy holiday of Eid, the show fully embraces the Islamic traditions that this family follows in everyday life. We also see the loving relationship she shares with her father Yusuf (Mohan Kapur) and that sibling bond with her older brother Aamir Khan (Saagar Shaikh). 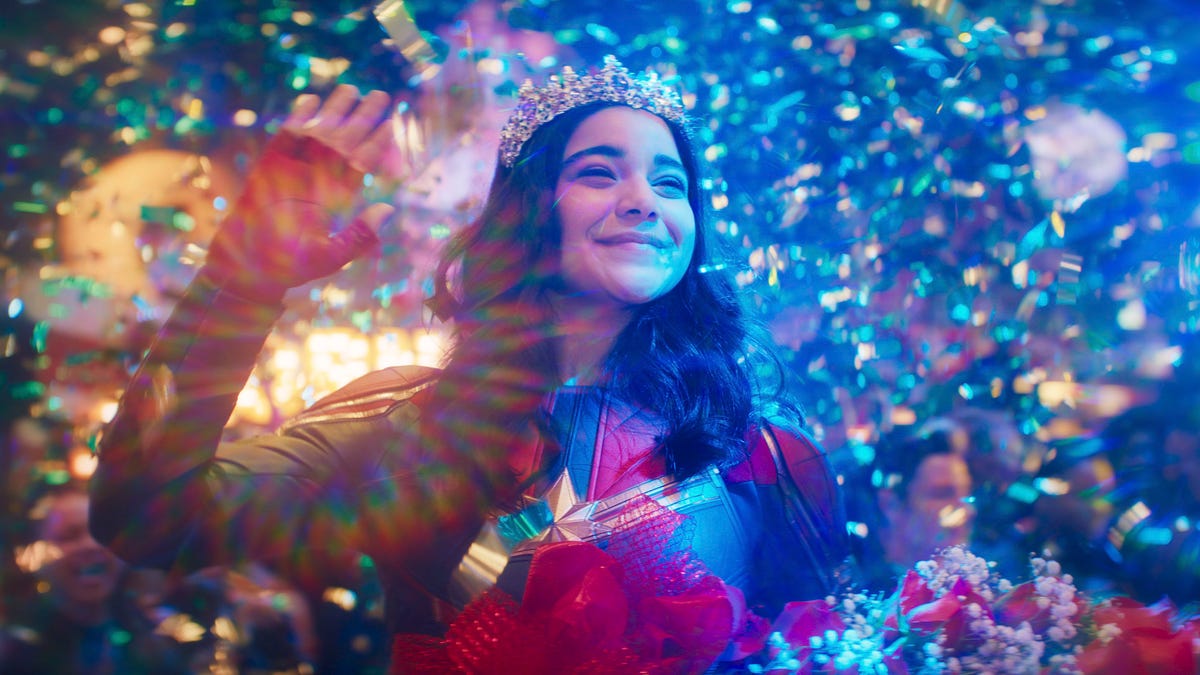 Ms. Marvel does well to balance Kamala’s fantasies and her personal life at home in Jersey. The show’s visual style feels very much like a comic book coming off the pages of the source material. It combines beautiful animation with live-action that blends perfectly on screen. When we see Kamala’s powers, it feels very much like how MCU would handle it. We also get to see how the fandom in the MCU is showcased through AvengerCon, which Kamala and Bruno attend. Even though her powers are slightly different from the comics, we see the cosmic connection that Kamala feels with these newborn powers that she receives after putting on these mysterious bangles sent by her grandmother. Thanks to some great direction from Adil El Arbi and Bilall Fallah as well as showrunner Biska K. Ali, they fully establish the muddiness of Kamaka’s abilities and how it affects her body in unusual ways.

What the show comes down to is its main star Iman Vellani, who fully embodies Kamala Khan as a character. It’s very clear that Iman is very much a fan of Marvel, which reflects in her portrayal as this character who is also a fangirl. It is why she is the perfect person to play someone as charming and heartwarming as Kamala. For this being her debut in Hollywood, it is hard to tell that this is Iman’s first time acting. There’s certainly a lot of pressure to play a character as important as Kamala, but Iman fully commits to the role. We get to see Iman shine bright in the scenes she shares with her parents as she attempts to be herself while also respecting her family’s wishes for her future. We can see that constant struggle of that in Iman’s performance and it comes off really strong. 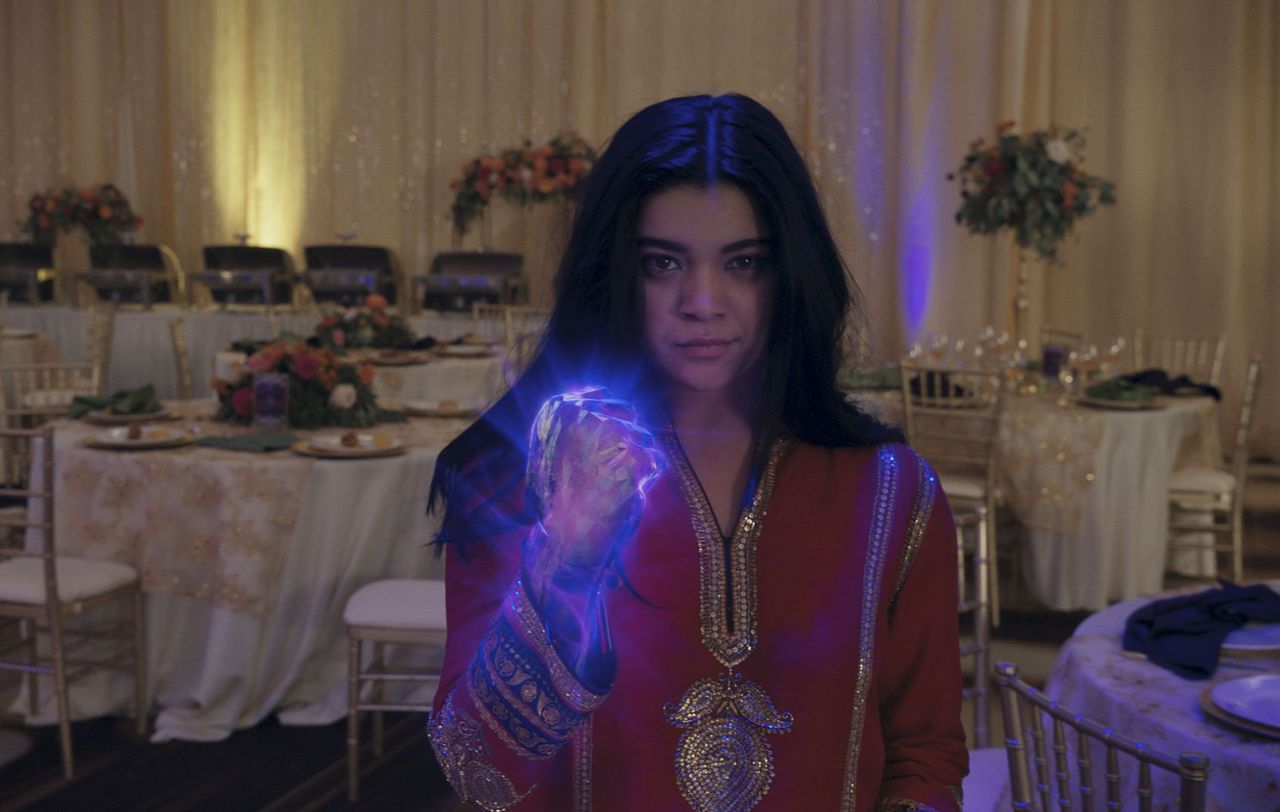 Ms. Marvel has become a great addition to the growing world of the MCU as Phase Four takes on bold new directions with these shows. It is a show that isn’t necessarily just a superhero show, but it also is a common story about being a teenager and finding out how one fits in both in school and with family. Seeing the American life through the eyes of a Pakistani teen offers a bold new perspective that will surely impress a lot of viewers and give the necessary representation to the South Asian community in the superhero genre just as the comics did thanks to an outstanding performance by Iman Vellani taking center stage. From what we’ve seen, this is a great start to Kamala’s journey into the great MCU.