Greetings readers and welcome back to another episode of The Underrated Vault. Today’s episode will be focusing on an anime series that a number of people on the internet have agreed is extremely underrated: Ginga Densetsu Weed. Yes, I know, part of the title may sound weird (especially since the character’s name is Weed), but it is the title of a very unique series that will forever be one of my favorites.

The Writing Tone and Animation Style

Literally translated as Silver Fang Legend Weed, the anime was originally a 60 volume manga series published in the Weekly Manga Goraku magazine. As a manga, Ginga Densetsu Weed is part of the seinen group, which is basically another way of saying that this series is meant for young adults and not for kids (kind of like the rating system for books, movies, and games). Sure, the cover may have cute and cool dogs on it, but this series gets brutal (as in some characters will die in gruesome ways) and there are plenty of swear words thrown about. There are times when the writing can seem a bit lazy and the animation can look a little weird, but there are still plenty of moments that help you continue watching. You can also tell that the other episodes are still given plenty of love and care. I will say that episodes one and twenty-six (the last episode) has (in my opinion) by far some of the best animation in the series, also there are a handful of episodes that have some of the most memorable, even heavy, moments that have stayed with me to this day. 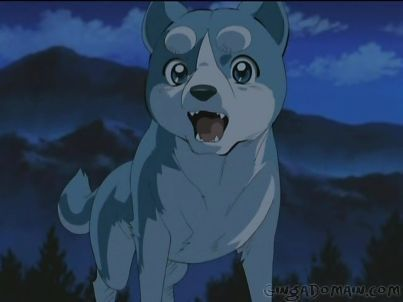 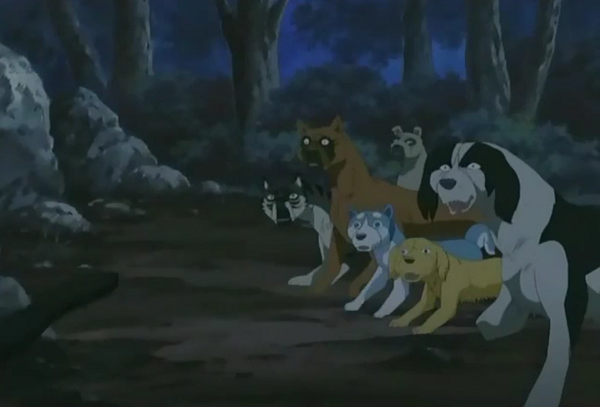 The one on the left is what was officially drawn and animated for the episode and not paused at a weird moment nor drawn as a comedic moment that other animes would do. It does happen and doesn’t necessarily mean that the series is unwatchable. There will be different animation directors for different chunks of episodes.

The story is a direct sequel to another series known as Ginga Nagareboshi Gin, which I will cover in another article. It takes place almost fifteen years after Gin’s story ends and follows the adventures of his son, who goes by the name Weed. Before you ask, no, Weed’s parents didn’t give him that name. The one who gave him the name was his godfather (self-proclaimed) GB, which is just another way to say that he is a small but strong individual. In the story, Weed learns that his father is the leader of the pack of dogs that took down the red-maned bear known Akakabuto, but has yet to personally meet him (which is one of the main plot points of the series). As he and his friends GB the English setter and Smith the French spaniel (a dog that fought alongside Weed’s father) begin their journey to Gajou (basically the pack’s main base of operations), which resides in the Ohu/Ou Mountains, they cross paths with various dogs that travel with them (each with their own personal issues). The first being a golden retriever pup named Mel, who was being used by a pack of adult dogs to steal food from pet stores. The other two dogs that Weed meets, upon arrival at Fugato Pass (a small area at the beginning of the mountains), are Kagetora (a Kai Ken) and Ken (a Great Dane), both sons of dogs that also fought alongside Gin. Long story short, because this is a sequel there will be characters from the previous series that reappear in this one, including their children. Also, there will be some parallels with various characters from both series, basically some of the characters that felt like the 2.0s of other characters from Gin’s story (despite some of them having memorable moments). 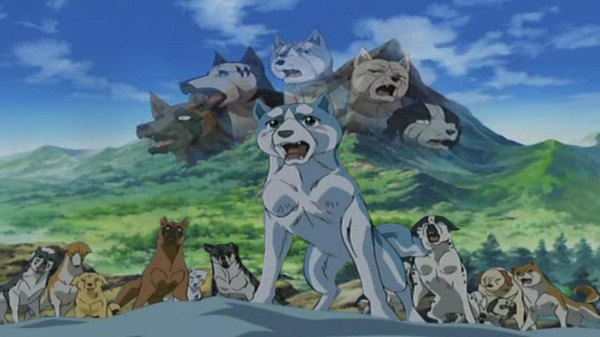 While the manga is labeled and sold as a seinen series, the anime is advertised and written as a shonen series, and it definitely shows. While I was re-watching the anime (for the sake of research and re-visiting the series), I was able to match the vast majority of the main characters to various shonen character tropes. The first is Weed naturally being the main character, so you’re going to see a lot of classic main character tropes. I will say that he will frustrate viewers from time to time with how serious he is with his philosophy of life (kindness and mercy will solve everything and change everyone). Also, because he’s the main character and Gin’s son, most of the other characters are going to load a TON of expectations on him to be Gin 2.0 and the next leader.

Without giving away too much about the other characters, here are the ones that represent your general shonen tropes. GB is basically the best friend character, who is sort of an adult, that is also the provider of some of the comedy in the series. Mel is pretty much the little kid character that is there to look cute, but he does have a few moments that show his growth in both maturity and as a character. Next, you have Jerome the German Shepherd, who is a small mixture of being Weed’s mentor/adviser and the calm ex-assassin character. Then there’s Smith who is the old man and mentor character who is still threatening despite his age. Kyoshiro, the kishu, is your typical bad boy character and despite being short-tempered and acts like a gang leader, he does have a strong sense of honor and justice. Rocket the Russian wolfhound is basically the “was a bad guy but is now a good guy thanks to the main character” character. Tesshin (his breed isn’t really specified) is literally a ninja dog that also trains Weed and teaches him Gin’s techniques. Reika, an Akita mix, is a minor character and is written as your general girl character (although she does have some cool moments). Last but not least, Hiro is the “I will avenge my father” character and is one of the “I do what I want, but I have a strong sense of honor” character.

I will say that this series does have some fascinating and well-written villains. In the first arc, known as the Monster Arc, the main villain is Kaibutsu, a dog that mutated into what it is now due to human experimentation. While its motivation, to kill all humans and those involved with them, is a simple one, it is very reasonable and you really sympathize with it. After the Monster Arc you’re introduced to Hogan, a Great Dane, the main antagonist of the Hogan Arc, and I’ve got to say things get more intense and interesting. While you feel a strong sense of hatred for this character, Hogan is still, in my opinion, a very interesting character. Sure, he seems like your typical villain with a massive army, but remember: all of the characters are dogs. Rewatching the anime gave me a chance to really study Hogan and his actions and while I hate him as a villain, I just love how he is written (and it’s really difficult to go into detail without spoiling anything major).

There are a few minor villains that also play some roles in the Hogan arc, but only two really stand out as being important to the story are Genba and Kamakiri. Genba is Hogan’s younger brother, so he acts in a similar manner. Although he mostly does what his brother says, Genba is still able to do things on his own, although he relies on Hogan to do more of the complex planning. You can really tell that these two really care for each other and are the other’s entire world. Kamakiri, the Irish wolfhound, is a minor villain that I feel like could’ve been written better, especially since he was basically written to be part of the character development of one of the protagonists in my opinion. He’s your typical power-hungry underdog (no pun intended) that wants to be the leader of the entire army/pack and will do whatever it takes to get there. Sure, he had a tiny sense of honor and didn’t agree with how Hougen performed certain actions, I still think he deserved better when it came to writing his character. 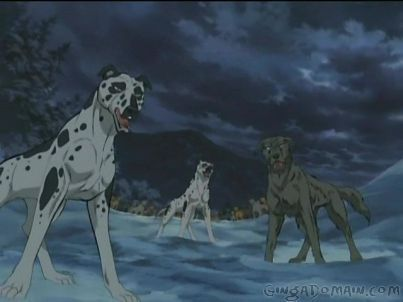 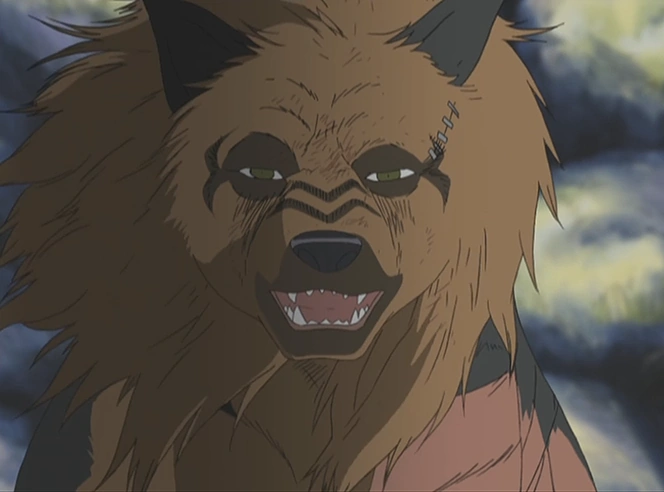 While the soundtrack isn’t as big as its prequel, Ginga Nagareboshi Gin, Ginga Densetsu Weed definitely has a handful of memorable songs and the way that they’re used in such a fitting way during certain scenes. Whenever I listen to those certain songs, there are certain scenes that immediately play in my head; one of those songs, Ways of The Soldiers, Ways of The Monster, plays during two of the most memorable scenes in the entire anime. Another song, which is a fan favorite, Exceed The Verge of Death, is one that you can count on to be played during some of the more intense fight scenes and that song makes my heart race every time I hear it play. The anime’s opening and ending themes are also extremely catchy and well worth playing and watching on repeat (there’s never-ending enjoyment in watching the animations).

I will have to say that while I re-watched the whole anime from a reviewer’s point of view, I’d still say that it holds up really well. The voice acting is fantastic and on point, despite the mouth movements not syncing one hundred percent with the voices of the characters (given that the characters are dogs barking). I will still say that episodes one and twenty-six are without a doubt the best-animated episodes, almost like an animated movie in terms of the quality. I won’t deny that there are moments where the story and/or some of the characters could’ve been written a bit better, but hey, it happens when a sequel is made for a series that is still heavily praised by fans. I hope that by sharing my experience with this fantastic series I’ve drawn in potential new fans. What I greatly hope is that, sometime in the future, this series (including Ginga Nagareboshi Gin) gets re-released on some of the major anime websites (i.e. Crunchyroll or even Funimation) and even on Blu-Ray and DVD. That is my greatest wish for this series.