Burn The Witch Adds More To The Cast Roster

Tite Kubo’s upcoming series Burn The Witch continues to shape up as the cast keeps growing for the theatrical anime project. Shonen Jump has recently revealed that four more cast members have been added for the upcoming anime adaptation. With the one-shot of the original story as a blueprint, the creator of Bleach is looking to expand on the world of Reverse London as new characters continue to be added.

It was previously announced that the series would focus on two of our female leads, Noel Niihashi and Ninny Spangcole. Burn The Witch has eight characters so far, with four of them already cast for the Japanese voices. The official Twitter page for the series revealed that the last four voice actors have been chosen for these last batch of characters. This includes Mugihito as Wolfgang Slashhaut, Chikahiro Kobayashi as Bruno Bangnyfe, Haruka Shimizu as Sullivan Squire, and Miou Tanaka as Roy B. Dipper.

These new additions join the likes of Asami Tano as Ninny Spangcole, Yuina Yamada as Noel Niihashi, Shimba Tsuchiya as Balgo Parks, Hiroaki Hirata as Chief, and Rie Hikisaka as Osushi-chan. The series takes place in the same universe as Bleach where we follow two witches working for the Western Branch of Soul Society, located in Reverse London. These witches are working to eliminate dragons from invading the human world using spells that are quite similar to the “Kido” that the Soul Reapers use in the original series. Both the manga and anime film is being made at the same time, making this an ambitious project for the Bleach creator. 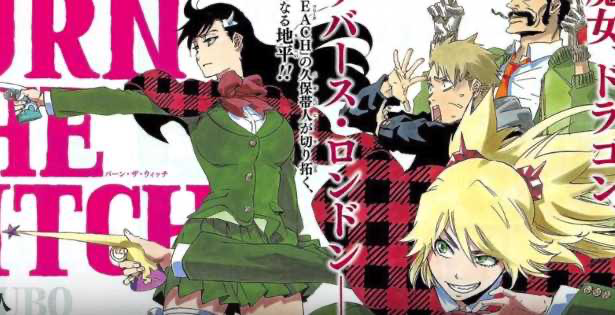 Despite have a special release in Japan, the theatrical version of the anime will be streaming as a three-part episodic series in other countries. The series will have a simultaneous release all over the world, with some differences between the Japanese theatrical version and the one being streamed outside the country. The series will be developed by Studio Colorido, the same studio behind the acclaimed Pokemon: Twilight Wings miniseries.

The manga series has already started with the release of the first chapter this week. The story will run as a four-chapter run miniseries, similar to the anime being developed as a film rather than a normal series.

The upcoming series will air on October 2nd on Crunchyroll. Viz Media will be in charge of distributing the English-language publication of the manga.