Minecraft is making its way to the arena in Super Smash Bros. Ultimate. In a new teaser, characters Steve and Alex from the popular sandbox title will be joining the growing roster of characters in Nintendo’s successful fighting game on the Nintendo Switch as part of the Ultimate Fighters Pass Vol. 2 collection.

Based on what we’ve seen in the video, these guys are more than just their blocky looks as they can put up quite a fight. As either Steve or Alex, players can swing their pickaxe for standard attacks, but they can’t jump as high as characters. However, they can also craft items and create blocks on the stage just like the main game to be used in battle. As their final attack, both characters use a special move called “House of Boom”, which can throw opponents into a pile of explosive Creepers. Both characters will be joined by Alex, a zombie, and an Enderman as well.

Along with these characters, there will also be a stage added that’s inspired by Minecraft that players can partake in during their next match with friends. This new stage will consist of six different areas that randomly change in each match. Just like Minecraft, the stage will have a day and night cycle with zombies and skeletons coming out in the night to scare off players. The new DLC will include at least seven tracks from the Minecraft series that players can own to play in the background of their matches. As one of the best-selling games of all time, Minecraft has sold more than 200 million copies so it makes sense that we would see the game teaming up with Switch’s most popular titles on the system.

Super Smash Bros. Ultimate director Masashiro Sakurai revealed in the video that the characters from Minecraft will pose some challenges in the game as their battle techniques are unusual, to say the least. These characters will create somewhat of a learning curve once players get to use them and see how they balance well with the game. Just like all the other fighters in the roster, the Minecraft characters will stand out from the rest with their unique fighting style. 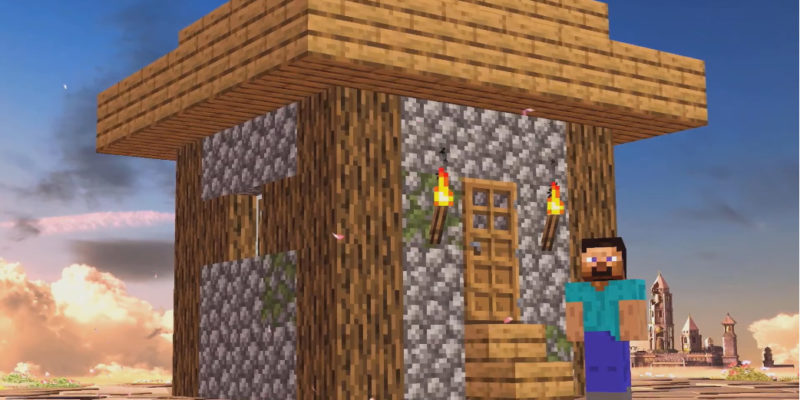 The announcement was made in conjunction with other related Minecraft news being shared by Microsoft at their live virtual event. Just like Super Smash Bros Ultimate, the popular Xbox title will also be part of a new spin-off called Minecraft Dungeons, a cross-platform game that is coming to the Switch as well.

Players can get their hands on these Minecraft characters on October 13th as part of the Ultimate Fighters Pass for $6 individually or for $30 to get the other characters in the collection like Arms’ own Min Min with four more characters being announced soon on Super Smash Bros. Ultimate.